Hey Congressman Ryan, why are you smiling? 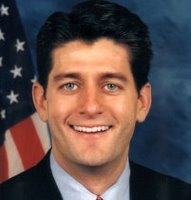 Hey Congressman- why are you smiling?

Woo! Hoo!
Now I understand! I am smiling too!!!

The House of Representatives today approved a House rules change co-authored by Congressman Paul Ryan that will shine sunlight on the process known as "earmarking" to bring greater accountability and transparency to Congress and deter wasteful pork-barrel spending.

By passing the rules change by a vote of 245-171, the House altered the rules under which it operates to require that all reported bills and conference reports considered in the House include a list of earmarks (funds allocated outside the normal formula-driven or competitive bidding process and targeted to a specific entity, state, or congressional district) and the name of the representative requesting each earmark. This applies not only to appropriations bills but also authorization and tax legislation.

In May, the House passed a broader lobbying accountability bill that contained similar reforms advocated by Ryan and other congressional activists for fiscal discipline and openness in the budget process. Unfortunately, the House and Senate haven't yet been able to resolve their differences on the lobbying legislation, so the House moved forward on its own to enact today's House rules change.

"This unilateral action by the House shows that we are getting serious about cleaning up pork-barrel spending. We are not going to wait for the Senate to act. We are going to reform the broken spending process in the House today," Ryan said. "We need to bring earmarks out into the open, where they will be subject to the full scrutiny of the public and members of Congress," Ryan said. "Until now, wasteful pork projects could be slipped anonymously into large spending bills without accountability to other members of Congress or taxpayers. Today's rule change puts an end to that in the House by making sure that everyone will know about proposed earmarks and who requested them. It's a common sense step in our push to end waste and abuse in government and shine the light of day on federal spending practices."

Under the new House rule, in order for the House to consider a bill, the committee of jurisdiction must list all earmarks included in the bill and committee report along with the names of the representatives who requested each earmark. If the committee fails to include a list of earmarks, a member of Congress can raise a procedural objection on the House floor against consideration of the bill or conference report.

Fiscal hawks in the House advanced today's rule change as part of the ongoing drive to rein in unnecessary federal spending and improve transparency and accountability. Congressman Ryan's legislative line-item veto bill, which the House approved in June, is part of this larger effort.

Earlier this week, the House also passed S. 2590, the Federal Funding Accountability and Transparency Act, to require the Office of Management and Budget to establish a searchable website, accessible by the public at no cost, that lists all recipients of federal grants, loans, and all contracts over the $25,000 reporting threshold. This site would enable the public, the media, and Congress to easily track who is receiving taxpayer funds and doing business with the government.

This is a great new step toward fiscal responsibility! It is about time we are able to see what our government is wasting so much money on.

How did Mark Green vote on this? He voted for fiscal accountability, of course!

I thought he was smiling because he found out Dr. Jeff Thomas was going to be his Democratic appointment in Novembef.