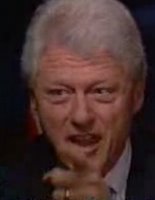 The docudrama "The Path to 9/11" really got to Clinton. He has done a interview with Chris Wallace on Fox News.

"But at least I tried. That's the difference in me and some, including all of the right-wingers who are attacking me now," Clinton said when asked whether he had failed to fully anticipate bin Laden's danger. "They had eight months to try, they did not try. I tried. So I tried and failed."

That was at the time that Bin Laden was not really in hiding!
Posted by K. Carpenter at 8:56 AM

You are a brain washed scum-bag. I am setting up a blog to destory your worthless rag here. Oh and I have massive connections so get ready to have the light rain down on you big time buddy. Your words will do you in, you can take that to the bank. Bush has had 8 years and he still can't catch him you piece of shit. He has destoryed this country and turned it into Nazi Germany. Your a sick human being and you deserve any tyranny we get. I hope your the first one in line at the FEMA CAMPS!