I have been wondering for several weeks if playing the race card is a smart political move.

Obama's numbers rose briefly after his speech to Congress. At least the numbers were rising until the media, political pundits and democrat politicians once again started calling Americans racists.

As you can see from Rasmussen's poll out yesterday, support for Obamacare rose until the weekend's coverage of the tea party in Washington DC.

It was then that the media pundits, political pundits and democrats attempted to dismiss the tea partiers as racists. CNN and MSNBC were probably the worst offenders making the accusations.

In the Sunday NYT, Maureen Dowd launched into the tea parties making the same charge of racism.

It was during that time that the numbers dove. In just two days time, Obama's healthcare support took a dramatic turn. He lost 6% of support in two days time...Sunday and Monday.

The most prophetic sign at the tea party on Saturday was this one: 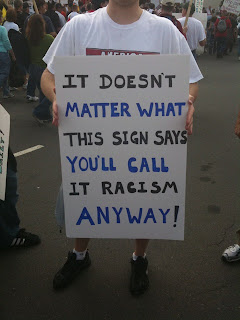 No doubt, that sign was right on the money.

Perhaps the middle American independent voter who may have questions or doubts about President Obama are getting sick and tired of being called racists, when they are not. Many of these people voted for Obama.

But the lefties, currently running our country, cannot seem to actually explain why at least one million people drove and flew in from all parts of the country to protest the Obama government and the Democrat government.

I have racist so many times that I have lost count. Some days, right on this very blog, I am called a racist multiple times.

So what should conservatives do about it?

Nothing, I guess. We cannot control the liberals that run this country and are calling us racists. So...vote them out in 2010 and 2012. There is not much more than we can do about it.

You think you got it bad, conservatives? Think about how bad this fellow has it: 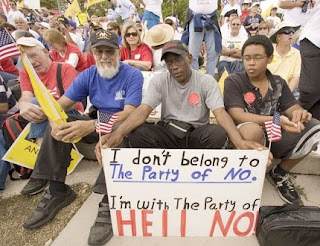 You have got to admire this fellow.
Posted by K. Carpenter at 8:07 AM