Are you sitting down?

Palin's speech in Hong Kong was a success. How do I know this?

The New York Times said so.

HONG KONG — Sarah Palin, in what was billed as her first speech overseas, spoke on Wednesday to Asian bankers, investors and fund managers.

A number of people who heard the speech in a packed a hotel ballroom, which was closed to the media, said Mrs. Palin spoke from notes for 90 minutes and that she was articulate, well-prepared and even compelling.

“The speech was wide-ranging, very balanced, and she beat all expectations,” said Doug A. Coulter, head of private equity in the Asia-Pacific region for LGT Capital Partners.

Of course there are some media outlets attempting to bash away, but even they are struggling to find something critical to say.

The speech was 90 minutes long. Not a easy task by any measure. She also stayed around and answered questions.

My favorite statement was from an Obama supporter:

“And there was nothing derogatory in it, no sleight of hand, and believe me, I was listening for that,” he said, adding that Mrs. Palin referred to Mr. Obama as “our president,” with the emphasis on “our.”

Mr. Goodé, a New Yorker who said he would never vote for Mrs. Palin, said she acquitted herself well.

“They really prepared her well,” he said. “She was articulate and she held her own. I give her credit. They’ve tried to categorize her as not being bright. She’s bright.”

The idea that Palin is a blithering idiot is exactly what the Obama loving media wants America to believe. What I find strange are the real blithering idiots, like Kathleen Parker, who are determined to undermine any change of having a conservative President again. They call themselves conservatives, but worship at the feet of President Obama. There is something terrible wrong with these Vichy republicans.

Even as the rest of the world is blasting and beating up on our President, somewhere in Hong Kong, Palin was proving that capitalism and freedom is still something worth standing up for.

There will be no apology tour on the world wide stage forthcoming from Sarah Palin. She will leave the apology tour up to President Obama. After all, he does it so well.

See their links for more 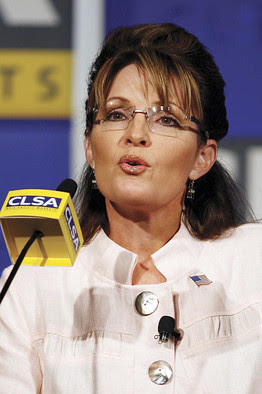