A lot has been made about how many people actually showed up in Washington DC on Sept 12.

Since they no longer do estimates because the Million man march only was officially estimated at 400,000 people, the guys doing the estimates had their funding yanked.

Basically, we have to figure this out on our own.

If you use this animated photo from USA Today on what the crowd estimates should look like at Obama's inauguration, this appears to have been the largest protest in American history. (Hat tip- Michelle Malkin)

In fact, there is no doubt in my mind that this will go down in history as the largest PROTEST CROWD in history. Not even the anti war protests during Vietnam can match this.

As you can see, the crowd of 1.2 million from Johnson's inauguration, stood well in front of the Washington monument.

From this photo on Fox News, the crowd is packed to at least the Washington monument. 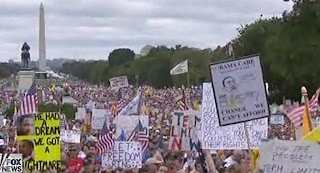 Also remember to go back to the USA Today page for the animated photo and to see where the location of the Washington monument as a reference.

Now I am not sure if the crowd at Obama's inauguation was as far back as the Washington monument. I have not seen any photo evidence of such, but I am looking. The official estimate for Obama's was 1.8 million people.

Keep in mind, people are lined up on the side streets and many said they could not make it in time because they were stuck in traffic.

What I find simply amazing is the mere fact that only eight months after being sworn in as President producing the largest crowd in history, the largest crowd PROTESTING that same President showed up. Oh how the mighty have fallen in such a short period of time.

Still, the media is really working their tails off trying to ignore this moment in history.

Protests took place all across the country this past Saturday, driving those numbers even higher and higher. There will be many more protests.

Attention to the dead head media: We will not be ignored!
Posted by K. Carpenter at 7:18 AM