I frequently contact all of my elected officials to find out where they stand on the issues. Being a fiscal conservative, I e-mail them to not only save trees and time, but also money (hence the fiscal conservative thing.) My state senator, and I use that term loosely, ALWAYS takes his good-natured time and writes me a letter back, at, of course, taxpayer expense. I would be much happier with an e-mail, but apparently e-mail is too complicated for Bob Wirch. The most obnoxious thing, aside from Bob-I'm-A-Fiscal-Conservative-(NOT)-Wirch wasting taxpayer dollars on envelopes, letterhead and stamps, when he could e-mail me for FREE, is he NEVER answers the question I pose to him. He also thinks he's pretty smart (which shows how ignorant he really is) when in his letters, he quotes some Republican to back up his uneducated thoughts.

Edited to add: After my personal proofreader, Guy Behind the Guy, read through my post, I'd like to note that the above sentence should read: Note to Bob: UNLIKE you, I don't toe the party line. I don't care what letter you have after your name, if you're an idiot, you're an idiot.

Recently, I e-mailed Senator Wirch asking him if he supported increasing the cigarette tax or not. (Sounds like a yes or no answer to me.) I received this letter back: 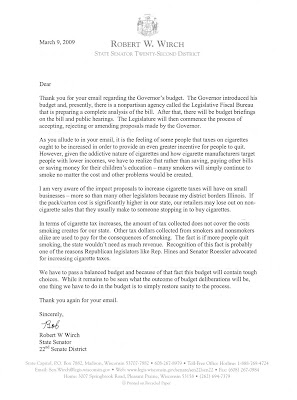 So, is he for or against raising the tax on cigarettes? I can guess his answer, since he LOVES to raise taxes on anything and everything. Bringing back the gas tax indexing is just one example.

But thanks for that lesson in how a bill becomes a law — I have the School House Rock Videos, also.

Well, it's been a week, and no word from my representation (and I use that term loosely) in Madison. So much for that thing we have called a Representative Republic.

As I continue to get letters from Wirch I'll let you see the quality of service my taxpayer dollars pays for in the 22nd District.
Posted by GOPgal at 1:02 PM