She is a quitter, right? 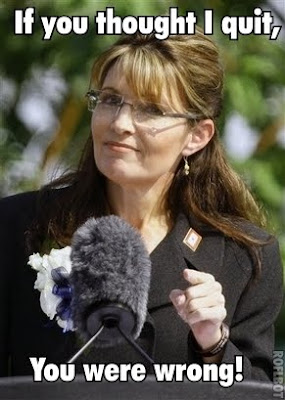 One little tiny short post on her Facebook page, exploded into the national debate on health care reform. Two little words...death panels..., and even some elitist's Republican heads were exploding.

Even President Obama was on national TV trying to calm fears over the "death panels". Robert Gibbs, mouthpiece for Obama slammed Palin for the last several days.

But she is irrelevant right????

She had all of America talking about death panels.

Over and over again we heard that there were no death panels, Palin was wrong.

So, again, last night, even after all of the ridicule, Palin slammed Obama and the so called health care reformers again with another Facebook entry.

Yesterday President Obama responded to my statement that Democratic health care proposals would lead to rationed care; that the sick, the elderly, and the disabled would suffer the most under such rationing; and that under such a system these “unproductive” members of society could face the prospect of government bureaucrats determining whether they deserve health care.

The President made light of these concerns.

Okay, well, today, an announcement has been made that the Senate Finance Committee has removed one section of the death panels debate.

The Senate Finance Committee will drop a controversial provision on consultations for end-of-life care from its proposed healthcare bill, its top Republican member said Thursday.

The committee, which has worked on putting together a bipartisan healthcare reform bill, will drop the controversial provision after being derided as "death panels" to encourage euthanasia by conservatives.

I tell you what, for a Republican, that according to the liberals and the media is so irrelevant, the liberals cannot stop talking about her. Worse yet, they are even answering to her criticism. Why would anyone do that if they really thought she was that irrelevant?

Keep fighting. Don't let the Obama liberals take your freedom to decide your own life and your own future.