An amazing video- Miracle on the Hudson

I have just got to comment on that plane crash in the Hudson river.

Yes, it was. The good Lord was looking out for those people that day. 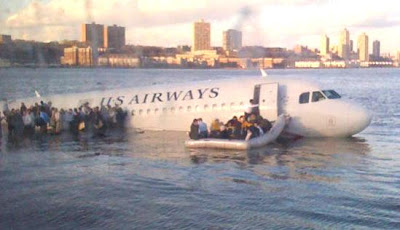 Still, so much had to go right in order for everyone to survive.

The pilot and his crew- amazing piece of flying and landing. Just one heartbeat of a moment of panic, everyone dies. But he did not panic. Just one slight tip of the wing into the water before the belly hits the water, everyone dies.

I cannot download the video to this page. But you can watch it on Gateway Pundit.
Here are the details:

2:00 minutes into the video- you see the plane sliding across the water on the left side of the screen.

2:36 Someone gets to the Coast Guard cameras and aims the camera towards the plane. In that 36 seconds, you will see passengers were already out of the plane on on the wing tips. That means those passengers were on there feet, got the exits open and were piling out within seconds. They really kept there wits about them!!!

3:46 mark- you will see that the person manning the camera noticed the ferry boat chugging towards the plane. That is only 106 seconds from the moment the plane hit the water and the ferry driver was already going full stream ahead trying to get to the passengers. That means that the ferry boat driver had to have turned his boat immediately towards the plane. If you continue to watch, you will notice that that ferry is really moving trying to get there. As they got close you can see they slowed down. Interviews later stated that the ferry boat pilot was worried about slowing down enough not to hit the wing tips and slam into the plane sending everyone into the frigid waters. What smart thinking!!!

6:00 mark- The ferry boat and it's crew were already pulling people out of the water and off the tips of the wings. 180 seconds after the belly of the plane hit the water they were already saving lives.

6:44 mark- another boat appears and heads for the opposite side of the plane to start getting people off. Another very smart move. You see that they had to approach slowly and get into position. It took them less than 60 seconds and they too were pulling people out of the water and off the wing tips.

7:52 mark- a third boat arrives- also appears to be the Coast Guard. To get a boat manned, started and moving in such a short period of time is just amazing.

The pilot and his crew did a great job, but so did the passengers. They actually saved their own lives and the lives of there fellow passengers with their quick think and calmness in a crisis.
Posted by K. Carpenter at 1:21 PM