I am exhausted, but I could not be more proud of what I saw take place in what is commonly referred to the "Berkley of the Midwest", Madison Wisconsin.

Announcements were that there were over 5,000 people that attended.

Of course, the media is not giving any official numbers, but even the Milwaukee Journal stated that several thousand appeared to be in attendance. Officials refused to give a count, instead folks were referred to the Department of Administration. The very same Department of Administration run by liberal governor Jim Doyle and big spending buddies. Imagine that, they are refusing to give an estimate.

Our dear governor wasn't even in the state of Wisconsin at the time. The liberals that control both houses in the state scheduled committee meetings all day long so that they were not in their offices at the time of protesters showed up to deliver our tea bags. We delivered them anyway.

I got evidence. Folks were there with every skin color. Republican, Democrat and Independents- you name it, they were all there.

Saw a friend there that lives in Madison and he said that he could not believe it, but for once our capital city looked like the conservatives outnumbered the liberals. 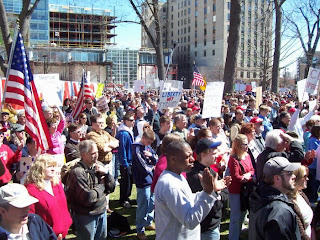 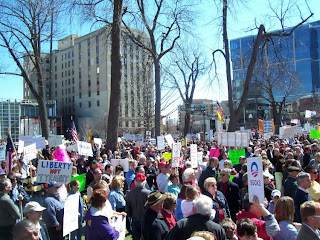 Updated: Stories from around the state