In complete defiance of the American people...

You would think that we live in a democracy, but the Democrats have proven today that this is no longer a democracy and we do not have a representative government. We now have an imperialistic government, determined to do as they please, and tax the commoners to do their bidding.

Before we get in trouble with our new King Obama and his court jesters, we better say this first:


If we truly had representative government, the healthcare bill would not have passed in the House or the Senate.

If was truly a good bill for the American people, the people would have recognized this and supported it.

If this was truly a good bill there would have been no need for backroom deals.

If this were truly a good bill, there would have been no need to buy votes with taxpayer funded goodies.

If this were truly a good bill, there would have been no need to cast votes under the cover of darkness, while America sleeps.

If this were truly a good bill, there would have been plenty of bi-partisan support.

The Democrats and a desperate President have defied the will of the people and rammed this down their throats.

A few minutes after the vote was taken, I scanned the poll numbers as proof of the Democrats defiance of the will of the American people. Now this is not a single poll, but an average of all the latest poll numbers.

The Democrats will try to explain away, make excuses, etc... for their defiance, but the proof is right here: 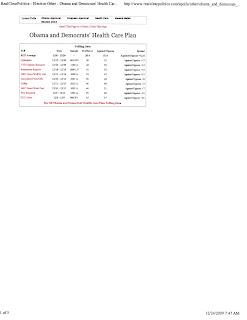 As we all gather with family and friends to celebrate the birth of the real King of Kings, remember this moment and say a prayer for the country you know and love. She is in trouble and we have very little time to right the ship and regain our freedom from our government.
Posted by K. Carpenter at 7:49 AM